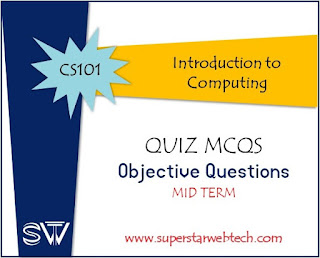 2. What will be the output of following OR expression 1010 OR 11111?
3.Data were stored in memory; programs were part of the ___
4. Which type of registers is used in program execution?
5. Which of the following is used to store data in computer?
6. UTF-8 uses 24 to ___ bits
7. To identify individual cells in a Computer’s main memory, each cell is assigned a unique “name” called its ___
8. The repetitive use of an instruction or sequence of instructions is called ___
9. This finding maximum number function will keep on going until we reach at the last value
[12, 18, 299, 38, 999, 101, 500, 801, 45]
10. Dynamic ram – Stores bits as tiny electric Charge
11. The Binary Search Algorithm, what will be the mid value in second level of recursion in the following array
[45, 77, 89, 90, 94, 99, 100] and key = 99
12. Robots can be guided by an
13. Bit is:
14. Which of the following language is used for server side scripting?
15. Process states include the value of the program counter as well as the contents of the ___
16. How many iterations are required to find 88 in the following array?
[5, 6, 77, 88, 99]
17. 10.011 added to 100.11 produces
18. Th instruction code to halt machine cycle is
19. Which Excess notation is used to represent 100 as Zero?
20. ___ tag is used to write paragraph in HTML document
21. Let a list Fred, Alex, Diana, Byron, Carol
After sorted first sublist our list would be
22. Which of the following is not true about pseudo code?
23. Which of the following statement is true?
24. The storage of a value with a fractional part requires that we store not only the pattern of 0s and 1s representing its binary representation but also the position of the ___
25. Software packages that allow users to access hypertext on the internet are called ___
26. ___ is also considered as character
27. Word processor like Microsoft Word is an application that
28. ___ keyword is used in python language to define a word
29. Appearance of each pixel is encoded to form ___
30. Average amount of time required for the desired data to rotate around to the read/write head once the head has been positioned over the desired track

31. Using ___ form eliminates the possibility of multiple representations for the same value.