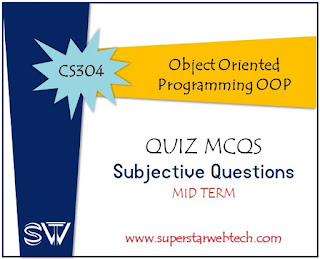 1. In which of the following, different forms of a single entity exist?

3. The technique in which we visualize our programming problems according to real life’s problems is called ___

4. There is no need of “is a” or “is a kind of” relationship in Generalization.

5. If only one behavior of a derived class is incompatible with base class, then it is

6. The process of hiding unwanted details from users is called __

7. ___ is automatically called when the object is created.

9. The concept of derived classes is involved in

10. Which part of an object exhibits its state?

11. Inheritance is a way to
12. What problem(s) may occur when we copy objects without using deep copy constructor?
13. This pointers are not accessible for static member functions.
14. A static member function cannot be declared
15. ___ remain in memory even when all objects of a class have been destroyed
16. Friend functions are functions of a class
17. ___, which means if A declares B as its friend it does NOT mean that A can access private data of B. It only means that B can access all data of A.
18. The statement objA=objB; will cause a compiler error if the objects are of different classes.
19. Identify which of the following overloaded operator function’s declaration is appropriate for the given call?
Rational_number_1+2.325
Where Rational_number_1 is an object of user defined class Rational_number.
20. Which operator can not be overloaded?
21. Memory is allocated to non static members only, when:

23. If you do not initialize static variable of int type then it is automatically initialized with ___

24. In Object Oriented programming, objects communicate with each other through ___

25. If we are create array of objects through new operator, then

26. When a base class can be replaced by the derived class then it is called

28. Separation of implementation from interface provides the facility to restrict the ___ from direct access.

31. Static member can not be called with the class name.

32. In a class declaration, data or functions designated private are accessible

33. The ___ keyword tells the compiler to substitute the code within the function definition for every instance of a function call

35. Main advantage of inheritance is:

36. An instance of user defined type is called ___

37. If a class involves dynamic memory allocation, then:

38. Information hiding can be achieved through ___

39. In programming, where the actual actions are coded is called:

40. Which of the following will happen when a constant function tries to change the value of data members of the class?

41. Which of the following features of OOP is used to derive a class from another?

42. Suppose there is an object of type Person, which of the following can be considered as one of its attributes?

43. The ability to derive a class from more than one classes is called.

44. Without using Deep copy constructor. A ___ problem can occur.

46. Which of the following is directly related to polymorphism?

48. We can allocate dynamic memory allocation through ___ key word.

49. Which of the following is an advantage of OOP?

51. In ___ sender of a message does not need to know exact class of the receiver.

52. Which of the following is not a major element in an object model?

53. Member functions defined inside a class declaration are ___ by default.

56. We can create array of objects if we have a user defined constructor.

58. ___ is creating objects of one class inside another class.

59. Constant data members can be initialized by using:

60. The sub-object’s life is not dependant on the life of master class in ___

61. When we create objects, then space is allocated to:

63. In object oriented programming, disadvantage of inheritance include:

65. If some of objects exhibit identical characteristics, then they belong to:

67. Object can be declared constant with the use of Constant keyword.

68. If we extend our model, and the rest of model is not affected, then it is called ___