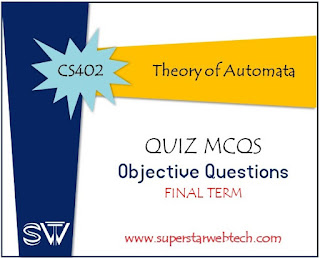 CS402-Theory of Automata Quiz  MCQS #Objective #Questions #Finalterm
1. Set of all palindromes over {a, b} is:
2. The unit production is ___
3. Which of the following cannot be represented by a regular expression?
4. If R is regular language and Q is any language (regular/non-regular), then Pref(___in ___) is regular.
5. If an FA accepts a word then there must exist a path from ___
6. a^n b^n generates the ___ language
7. A language ending with ‘b’ partitions Σ* into ___ distinct classes.
8. Which of the following refers to the set of strings of letters that when concatenated to the front of some word in Q produces some word in R?
9. The CFG is said to be ambiguous if there exist at least one word of its language that can be generated by ___ production trees.
10. A problem that has decision procedure is called ___ problem
11. The language  “PRIME” is an example of ___ language.
12. There is at least one production in CFG that has one___ on its left side.
13. For a non regular language, there exists ___ FA
14. Consider the following CFG:
S->a|Xb|aYa
X->Y|^   (NOTE: ^means NULL)
Y->b|X
Which Non-terminal(s) is/are NOT nullable?
15. One language can have ___ CFG(s)
16. If L1 and L2 are two regular languages, then they ___ expressed by FAs.
17. In a CFG, the non-terminals are denoted by ___
18. If the FA has N states, then test the words of length less than N. If no word is accepted by this FA, then it will ___ word/words.