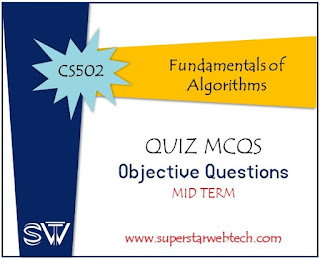 CS502-Fundamentals of Auditing Quiz  MCQS #Objective #Questions #Midterm
1. While solving Selection problem, in Sieve technique we partition input data ___
2. In Selection problem, the Sieve technique works in ___
3. While analyzing Selection algorithm, we make a number of phases, in fact it could be as many as ___
4. In the statement “output P[i].x, P[i].y”, the number of times elements of P are accessed is ___
5. In Heap Sort algorithm, Heapify procedure is ___ in nature
6. The O-notation is used to state only the asymptotic ___ bounds
7. The time assumed for each basic operation to execute on RAM model of computation is ___
8. The iteration method is used for ___
9. Efficient algorithm requires less computational ___
10. In plane sweep approach, a vertical line is swept across the 2d-plane from ___
11. Counting sort is suitable for sorting the elements within range 1 to P, where ___
12. In Dynamic Programming based solution of the knapsack problem, to compute entries of ‘V’. we will imply a(n)___ approach
13. We can make ___ recursive calls in Fibonacci Sequence
14. In Quick sort algorithm, ___ decides nature of Binary Search Tree formed by Pivots.
15. In Dynamic Programming approach, solution is modified/changed ___
16. Radix sort performs sorting the numbers ___ digit(s) at a time
17. In the Fibonacci sequence, each term is calculated by ___ previous ___ terms.
18. ___ is a linear time sorting algorithm
19. A sorting algorithm is called as ___ if duplicate elements remain in the same relative position after sorting.
20. For comparison-based sorting algorithms, it is ___ possible to sort more efficiently than Omega nlog(n) time
21. In ___ Knapsack problem, the limitation is that an item can either be put in the bag or not. Fractional items are not allowed.
22. We do not need to mathematically prove that for comparison-based sorting algorithms always takes Omega nlog(n) time.
23. Identify the TRUE statement
24. Radix sort is not a non-comparative sorting algorithm
25. Dynamic Programming strategy is useful when sub-problems are independent
26. For average-case time analysis of Quicksort algorithm, Pivot selection is on an average basis from ___
27. Bubble sort is not an in-place sorting algorithm
28. In Fibonacci Sequence, unnecessary repetitions do not exist at all.
29. In a strong components algorithm, the form of graph is used in which all the ___ of original graph G have been reversed in direction.
30. Traversing a graph means visiting ___ in the graph.