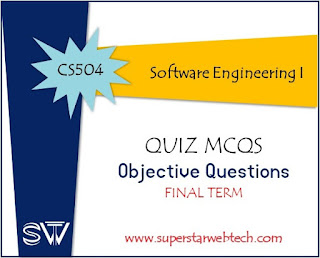 1. It ensures that a class only has one instance and provides a global point of access to it.

6. Class Variables should never be declared public. Public variables violate which of the following:

7. —– provides a unified interface to a set of interfaces in a sub-system.

8. “Description of communicating objects and classes that are customized to solve a general design problem in a particular context.” is called ——

9. In the N-tier architecture, the idea is to enhance scalability and —— by distributing both the data and the application using multiple server machines.

10. In case of a file servers, client requests selected records from a ….. and the server transmits records to client over the network.

13. When an error is thrown the overall system (on the lookout for this error flag) responds by ___ the error.

14. The complexity of a program may ___ if there are exceptional paths in it.

15. Which of the following is used for multi-level commenting?

16. Testing of collection of modules to discover interfacing problems among interacting modules is called

17. Which of the following shows a commented statement in C++

20. Floating point constants should always be written wth decimal point and at leat

21. In case of using unrelated operators in a single expression, ___ would be best choice to prevent the logical errors.

23. Which of the following is/are among ten things, which the basic template of GOF design pattern includes.