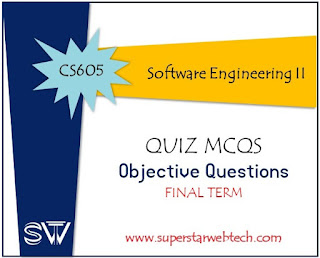 CS605-Software Engineering II Quiz  MCQS #Objective #Questions #Finalterm
1. Earned Value Analysis (EVA) is a ___ technique for assessing the progress of a project
2. The basic idea behind Software configuration management is:
3. Following are effective guidelines for Review EXCEPT
4. if :
E = Errors found before shipment
D = Errors found during operation
Then Defect Removal Efficiency (DRE) is equal to:
5. In order to use the PERT and CPM, which one of the following is NOT required?
6. If an error related to requirements is identified in testing phase, this error will be considered as an error of ___ phase
7. Quality cost may be delivered into costs associated with:
8. Poka-Yoke is the name of a
9. Configuration Auditing deals with:
10. FTR stands for:
11. A Software Requirement Specification is traced if the ___ of its requirements is clear.
12. Version Control discusses about:
13. The implemented requirement has been ___ through the selected approach, such as testing or inspection.
14. The Software reengineering is a ___ activity.
15. Which of the following is NOT an example of Software Configuration Item (SCI):
16. Mean Time Between Failure (MTBF) can be calculated by:
17. ___ software development is itself risky as changes to one part of the system inevitably involve further changes to other components.
18. Program is restructured ___ the reverse engineering phase. In this case we modify source code and data in order to make it amenable to future changes.
19. ___ Managers look at the system from the angle that does the system and associated business process make an effective contribution to the business goal?
20. ___ user assess the system from the perspective of how effective do they find the system in supporting their business processes and how much of the system functionality is used.
21. A system is considered to be a legacy system if it has been in operation for ___ years. A legacy system has many components.
22. Legacy system migration, however, is an easy task and there are a number of risks involved that need to be mitigated
23. ___ engineering does not simply create a modern equivalent of an older program, rather new user and technology requirements are integrated into the reengineering effort
24. Which of the following the NOT one of the attributes of requirements.
25. If the version of a release changes from 1.0.0 to 2.0.0 what will you conclude about new release (having version 2.0.0)
26. Which of the following is NOT one of the tasks included in Software Configuration Management.