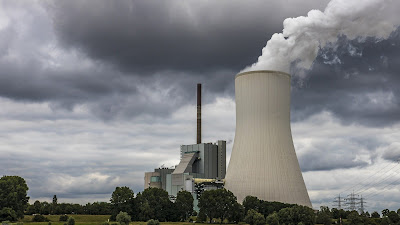 Our environment is constantly changing due to the interplay of many natural and unnatural factors on the planet. Nature has the solution to the biological causes of adverse effects, but the artificial elements that emerge from human activities cause irreparable damage to the environment. Thanks to science and technology, a network of industries have been created in today’s world, the distances have narrowed, and the work of years and months has begun to take hours and minutes. But there is also the bitter truth that as man progresses, nature is headed for destruction. As a result, our natural environment is becoming polluted with unnatural densities, the effects of which are irreparable.

Air pollution is the first kind of environmental pollution. There is a cover of different gases around the earth. Nitrogen, oxygen, carbon dioxide, and other gases are included in this envelope in a particular proportion. Due to the modern industrial and scientific age, smoke from the engines of countless vehicles and smoke from the chimneys of factories and harmful gases and vapours are released into the atmosphere. These toxic gases affect not only humans but also plants.

Mineral fuels such as petrol, diesel, mobile oil, kerosene, and coal are commonly used energy sources. Their combustion releases sulfur, carbon, and nitrogen oxides and combines them with other compounds to form harmful compounds. For example, a mixture of lead is added to the gasoline used in motor vehicles. Thus, the burning of this gasoline releases leads and carbon particles in the form of black smoke. This smoke spreads in the air and causes various diseases. Dust is also an element of pollution. The dust created by the movement of vehicles on rough paths and broken roads pollutes the whole air and causes respiratory, eye, and skin diseases. The gases emitted from the combustion of fossil fuels combine with dust particles and other chemical and water vapours in the atmosphere to create a toxic haze, which harms living things and plants and air and road traffic. It also causes accidents.

Excessive use of fossil fuels causes the amount of carbon dioxide in the atmosphere to exceed the natural balance. It accumulates in a thick layer in the gas mantle, which does not allow the heat from sunlight to escape. This effect has led to an increase in the planet’s average temperature, leading to climate change worldwide.

The best way to prevent air pollution is to find an alternative to fossil fuels and get rid of air pollutants. We can use solar, water and wind energy to get rid of air pollution. The gases emitted from industrial plants and create air pollution should be treated with hazardous substances, and all industrial establishments must do so. We should prioritize the use of lead-free petrol in motor vehicles, service car engines on time, and ban smoke emitting vehicles. Where there are many factories, trees should be planted frequently, as trees absorb carbon dioxide from the atmosphere and release oxygen. Also, we should set up factories at a distance from the population and spray pesticides on crops.

Water is a gift of nature, without which the survival of human life is impossible. Since water is the best solvent, most of the solids dissolve in it and contaminate the water. In addition to aquatic life, it also has a detrimental effect on land animals, humans, and plants. Water is widely used in all industries. After industrial use, wastewater is discharged into nearby ponds, streams, and rivers with soluble and chemical substances, which has a detrimental effect on agriculture and the economy. The number of fish in streams and rivers decreases rapidly, and contaminated water for irrigation is not without danger. The harmful chemical compounds enter the plants through the roots of the plants. The use of such crops as food can cause many deadly diseases. 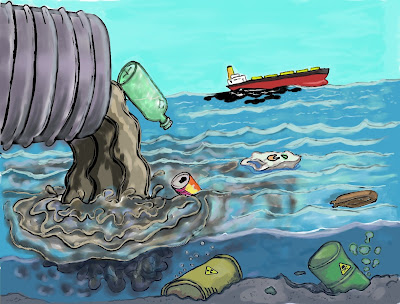 All polluted and dirty water from urban areas is dumped in a nearby drain or river without being treated. When this contaminated water is used for irrigation and drinking in the lower regions, it affects agriculture and human health. Groundwater is also polluted due to these densities. Chemical waste liquids and wastewater from coastal streams are also dumped into the sea. Which also degrades the seawater. Oil spills from tankers during the extraction, delivery, and transportation of mineral oil from the waters also cause marine pollution. Coastal areas are also affected by this pollution, and it is also deadly to aquatic animals.

Due to the shortage of drinking water in the country, water from wells, streams, canals, and streams is used in most rural areas, often polluted. As a result, people suffer from many deadly and epidemic diseases. According to one estimate, 40% of deaths in Pakistan are due to contaminated water alone.

To prevent water pollution, it is first of all necessary for the water-consuming industries to make arrangements for the treatment of polluted water and to legally oblige them to discharge the dirty water into streams or rivers without treating it. Don’t settle. At the same time, we should improve the management of wastewater in small and large cities and not dump this water in streams and rivers without reducing pollution, significantly reducing water pollution.

Air and water pollutants cause ground pollution. Industrial solid or semi-solid waste and residential waste also cause ground pollution. Cattle waste and other wastes used for agriculture and transportation are also a cause of pollution. Some of these factors are soon dissolved or disposed of by natural elements. Still, some are not disposed of by biological factors, such as plastic products, etc., that no disposal arrangements are included in the natural characteristics. Sometimes the piles are burned to get rid of the garbage. The smoke produced in this way causes air pollution. In the current industrial age, the use of items and products that contain insoluble substances has become common, and disposing of them has become a severe problem. Sometimes industrial solid or semi-solid waste is buried in the ground, causing its harmful effects to seep into groundwater.

To prevent land pollution, it is necessary to separate the organic matter from the solid waste of domestic garbage, commercial areas, streetcars, and public institutions and get energy from it through the gas plant. Organic matter can also be used as a natural fertilizer after proper correction.

Forests are also a treasure trove of nature and a natural tool for keeping the environment clean. Wherever deforestation reduces forest cover, the land becomes prone to deforestation, which reduces arable land and water resources, depleting and polluting. Therefore, it is necessary to stop the total deforestation immediately and cut it in strips. The use of alternative fuels for wood can also prevent deforestation. Instead of leaving fertile or semi-fertile land vacant, we should plant trees on it. Due to population growth, instead of converting land and forests into uninhabited residential areas, fertile land should be left for agriculture and residential areas. Use barren or uncultivated land.

Noise is the name given to unwanted, loud, and awkward sounds. Radios, televisions, loudspeakers, motor vehicles, industrial machines, etc., make a lot of noise. This noise affects the people around. The primary measure of sound intensity is called the decibel, and the human ear can hear sound up to 90 decibels without difficulty. Noise is more harmful to human health. If a person is exposed to 90 decibels of noise for eight consecutive hours, he may become deaf. An explosion of 160 decibels of noise can make a person completely deaf. Noise levels are very high during the day in busy squares of big cities, while in airports and some factories, the noise level is 80 to 120 decibels. Noise disturbs the calm environment and has a profound negative effect on the human psyche and health. People who spend many hours a day in a noisy environment can suffer from various neurological and cardiovascular diseases and deafness.

Although noise pollution cannot be completely controlled, we can minimize it as much as possible, and, inevitably, it will not cause any noise. We should keep all vehicles and silencers in good condition and install regular noise-absorbing devices in high noise factories. Build materials that absorb sound instead of resonating. Trees should be planted frequently around airports, railroads, roads, and factories, as trees can absorb noise naturally.

Other causes of environmental pollution:

In addition to the above factors, many other factors also cause environmental pollution, with radioactive substances at the forefront. The use of nuclear energy is overgrowing in the current era. Wasteful radioactive substances emit intense radioactive radiation into the waste of nuclear plants and nuclear power plants. These wastes can be hazardous if not disposed of in a very safe manner. Nuclear explosions or experiments also spread radiation pollution. According to modern research, excessive use of X-rays and ultrasound can also cause many diseases in the body.

Overpopulation is also a cause of environmental pollution. Due to the rapid increase in population, the burden on natural resources increases, and food shortages have become severe. In addition, the number of homeless and unemployed people is rising, and the growing slums present a grim picture of environmental pollution. That is why efforts are being made to reduce the global population rate, citing population growth as the leading cause of all forms of pollution.

Man’s environment reflects his nature. Healthy human beings give birth to a healthy society, and no progress at the cost of health can genuinely be called progress. Therefore, we must use water, energy, and all other resources efficiently, following the basic principles of the environment. Otherwise, the destroyed ecosystem will be left for our future generations and nothing more!