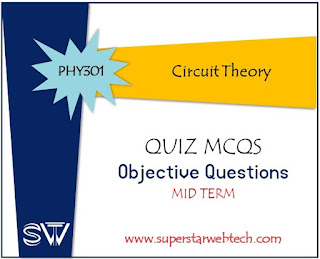 1. Three resistances of values 7 ohms, 5 ohms, and 2 ohms are connected in series of a voltage source. Through which resistance least current will flow.

2. What is the electron valence of an element of atomic number 5?

3. The closed path for flow of current in which no node is encountered more than once is called

4. Current through open circuit is:

5. When one resistance in a series string is open

6. A voltage divider is also called as

8. Which one of the following components in the circuit is used to produce heat or limiting amount of current?

9. Junction of two or more than two elements in a circuit is called

10. Usually, KVL OR KCL equation is not written for

11. The internal resistance of an ideal voltage source is
12. Distance or link between two nodes is called
13. Unit of inductance is
14. When two resistances are connected in series
15. Electron orbits are called